Cannonball Adderley - Swingin' In Seattle, Live At The Penthouse 1966-67

Previously-unissued recordings of Cannonball Adderley live at the Penthouse jazz club in Seattle from 1966-67. 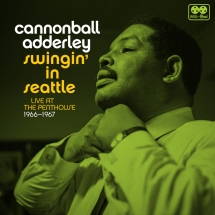 Swingin' in Seattle: Live at the Penthouse (1966-1967) is a collection of previously-unissued recordings by the Cannonball Adderley quintet captured live at the height of his powers over 4 nights at the famous Penthouse jazz club in Seattle, WA between 1966 and 1967. Just one week later, Adderley would record his classic Mercy, Mercy, Mercy: Live at "The Club" album at the Capitol Records studio in Hollywood, CA. This set features Cannonball Adderley on alto saxophone, Nat Adderley on coronet, Joe Zawinul on piano, Victor Gaskin on bass and Roy McCurdy on drums. The extensive booklet includes rare photos by Tom Copi, Ray Avery, Lee Tanner and others; essays by music journalist Bill Kopp and original recording engineer/Seattle radio DJ Jim Wilke; interviews with drummer Roy McCurdy, Cannonball's widow Olga Adderley Chandler and saxophonist Vincent Herring; plus much more! Swingin' in Seattle, along with Etta Jones A Soulful Sunday: Live at the Left Bank, are the first two releases from the newly-formed Reel to Real Recordings launched by producer Zev Feldman and saxophonist Cory Weeds and focused on important historical jazz releases.

This release marks the entry of a potentially important new label into the historical-jazz category. The package, including rare photos, is lovingly crafted. The music comes from four gigs at the Penthouse in Seattle in 1966 and 1967. It is not great Cannonball. It is very good Cannonball, which is to say it puts the work of most other alto saxophone players, living and dead, to shame. Brother Nat and Joe Zawinul also kill.