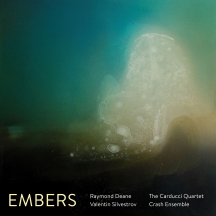 The opener, Deane's Marthiya, is named after a form of lament traditional in the Middle East, and is itself a lament over Iraq, composed as that country was suffering invasion, bombardment and dire economic sanctions. The music's ''atmosphere of mourning'', Deane writes, is ''not unrelated to the devastation wreaked on Iraq since 2003, and to the wider carnage inflicted upon the Arab and Islamic world by the west over the last century.'' Deane's other contribution is the title track, written thirty years earlier but by very much the same individual. Though perhaps more questioning than elegiac, Embers is music again on the edge of tears. Ideas, bits of tune, come and go, and recur, very much as things come and go, and come back once more, in the Beckett play. To quote the composer: "The piece obsessively turns over musical fragments which seem to have some remote but uncertain origin.''

Silvestrov's music gives voice to the sense we may all feel of being bereft, left behind by what was once a social culture of sympathy and togetherness. Listening to his Third String Quartet, we seem to be watching from the dock as a great liner slowly slides away, taking with it our hopes and our dreams. Something of this feeling of being on the sidelines of history may come from the composer's inheritance as a Ukrainian. Ireland, he notes, is not so far away: ''I believe there is some Irish accent, and some simple melodies, that permeate the whole work and may sound as symbols of this wonderful country, in whose destiny and historical legacy I perceive a close spiritual affinity to Ukraine, my homeland.''

All three works are captured in intense, poignant performances by leading ensembles: Crash (for Marthiya) and the Carducci Quartet.