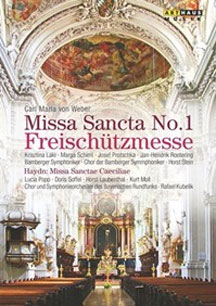 Carl Maria von Weber composed the "Missa Sancta No. 1" in ocassion of the name day of King Friedrich August I of Saxony. Weber himself conducted the first performence in the Dresden Hofkirche in 1818. Thanks to the creation at the very same time it is also called "Freischützmesse".More than 250 years later the rare performed work had a revival in the Basilika Waldsassen. Horst Stein, longtime principal conductor of the Bamberg Symphony Orchestra and famous for his work at Bayreuth Festival, conducted a first class cast with the soloists Krisztina Laki, Marga Schiml, Josef Protschka and Jan-Hendrik Rootering.Founded in 1946, the Bamberg Symphony has become during the last 70 years not only the musical hub of the entire region, it's one of Germany's most-travelled orchestras, the first to tour abroad after the war, notching up more than 6,500 concerts in 500 cities and 60 countries worldwide. Arthaus Musik presents the performance of Haydn's "Missa Sanctae Ceaciliae" conducted by Rafael Kubelík live from the Basilika Ottobeuren. The work was without doubt one of the highlights of the wonderful Kubelík era. Under his guidance the Symphonieorchester des Bayerischen Rundfunks also became one of the world's foremost Haydn orchestras. When the orchestra discovered the baroque Basilica of Ottobeuren as the perfect venue for sacred music of the classic-romantic repertoire, their concerts enjoyed huge popularity, leaving a lasting impression on those who experienced them at first hand.