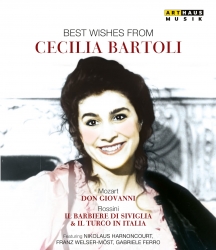 Bartoli, Cecilia has been one of the leading artists in her field for more than twenty years! The Italian Coloratura Soprano sings a wide variety of genres in many different languages all over the world. In this special Arthaus Edition she can be seen in three Coloratura – Classics of Italian Opera:Rossini, Gioachino: IL BARBIERE DI SIVIGLIA Rossini was 24 years old when in 1816 he wrote his seventeenth and most famous opera, The Barber of Seville, in an astonishing three weeks.Michael Hampe's humorous direction of this 1988 live-performance at the Schwetzinger Festspiele stands out with its high tempo that makes for a highly exuberant production.Rossini, Gioachino: IL TURCO IN ITALIAIl turco in Italia is one of Rossini's wittiest but most neglected works. It is full of ingenious and freshly composed invention.Bartoli, Cecilia has been heralded as the most exciting, accomplished and beautiful Rossini singer to appear in the modern era, remarkably similar in range, presence and temperament to Rossini's great love, the fiery Spanish soprano Isabella Colbran.Wolfgang Amadeus Mozart: DON GIOVANNIThis production of Don Giovanni at the Zurich Opera House was staged by the highly creative team of conductor Nikolaus Harnoncourt, director Flim, Jürgenm and set-designer Erich Wonder. Rodney Gilfry and Bartoli, Cecilia lead a first-class group of singers.