Celtic Harp Orchestra - Got The Magic 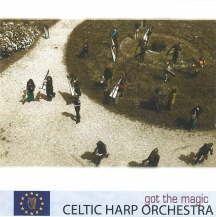 The Celtic Harp Orchestra, founded in 2002 by Fabius Constable, is a musical formation primarily of lever harps, or Celtic harps, as they are commonly known, alongside other instruments such as cello, violin, flute, accordion, guitar, bass, drums, soprano voice and choir.[1][2] The largest celtic orchestra in Europe with 16 harpists, 12 women, CHO has released seven albums, this their best.