YOU BELIEVE IN REVENGE BUT I DON'T... IT NEVER ENDS 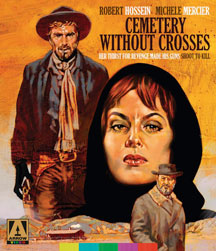 YOU BELIEVE IN REVENGE BUT I DON'T... IT NEVER ENDS Inspired by the international success of the Dollars trilogy, and dedicated to director Sergio Leone, Cemetery Without Crosses offers a Gallic spin on the Spaghetti Western formula thanks to its star and creator, Robert Hossein (best-known to English-speaking audiences for his role in Jules Dassin's Rififi). After her husband is lynched by bandits, Michele Mercier (Mario Bava's Black Sabbath) seeks revenge and turns to an old friend, played by Hossein, for help. A solitary figure who lives in a ghost town and dons a single black glove before each gunfight, Hossein is initially reluctant but soon infiltrates the widow's enemies to force a showdown. Cemetery Without Crosses is a darker breed of Western, bleak and melancholy in tone amid the explosive set pieces. It also boasts an outstanding score by composer Andre Hossein (father of Robert) and the catchiest of themes, sung by cult figure Scott Walker.

Cemetery Without Crosses so utterly defied my expectations that I'm not sure if I can even adequately review it with a single viewing. Honestly, that's thrilling to me as a writer and as someone who profoundly loves cinema, and it's a further example of what a remarkable library Arrow Films has amassed in their very short time on these shores. Recommended.

Worth a look, whether you're a western fan, or simply looking to enjoy a unique slice of European cinema that jams a stake in the ground of some pretty familiar territory. It eschews those conventions for something incredibly artsy, almost noir-ish.

One of the best and certainly among the least heralded of Euro-Westerns, Cemetery Without Crosses is a real find and a DVD Talk Collector Series title.

A thoughtful action film; with genuine drama. And that's a pretty good and welcome combination.

A satisfying evocation of the classic spaghetti Western and an interesting variation, with a sense of doom right out of French gangster dramas.

A raw little gem of a movie, well worth tracking down.