Chamber Ensemble of London - Over Hill, Over Dale 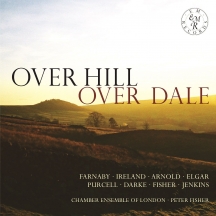 EMRCD017 (Over Hill, Over Dale) features English music for string orchestra played by the Chamber Ensemble of London directed by Peter Fisher. The focal point of the disc is Malcolm Arnold's Concerto for Two Violins, which is placed alongside the premiere recordings of Seven Pieces for String Orchestra by Giles Farnaby in an arrangement by Sir Granville Bantock, Harold Darke's Fantasy in E major, the Sinfonietta for Strings by Clive Jenkins and a witty pastiche by Peter Fisher, Variations on Widecombe Fair in the style of Paganini. These are complemented by Purcell's Overture and Rondeau from Abdelazer, Elgar's Elegy for Strings and the solo cello version of Ireland's The Holy Boy. The disc is dedicated to Frances Andrade, a member of the CEOL, and whose recent tragic death deeply affected the Ensemble.