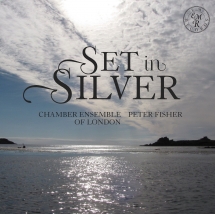 'Set in Silver' provides a fine introduction to the glories of English string music, both well-loved and less-known. The Chamber Ensemble of London, directed by Peter Fisher (violin), perform the 'Chacony in G minor' by Henry Purcell, Concertos by Charles Avison and Richard Mudge and an Overture by Handel's colleague John Christopher Smith, alongside works for string ensemble by Elgar, Delius, Frank Bridge, John Ireland and William Walton and the original version for strings of the 'Meditation on Brother James's Air' by Harold Darke, much-loved as an organ piece. The recording includes evidence of the talent of the late John Dankworth as a composer: 'Mariposas' was written specially for Peter Fisher's Wigmore Hall début in 1996 and was later orchestrated for the Chamber Ensemble of London. Other works on the discs have been written especially for the Ensemble by Clive Jenkins, and other contemporary composers represented include Paul Lewis and Nigel Brooks.