This is part of a mini-series on our competitively priced budget label Fabulous under the banner of Jazz Legends, 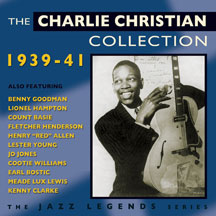 This is part of a mini-series on our competitively priced budget label Fabulous under the banner of Jazz Legends, presenting some of great and influential names of jazz, with recordings drawn from the classic era of the genre's development between 1920 and 1950. Charlie Christian was one of the key figures who shaped the development of jazz guitar, in particular the use of the amplified electric guitar. His use of the single-string solo technique, aided by the amplification which brought the instrument out of the rhythm section and into front-line solos, revolutionised the role of the guitar in jazz, especially in a small group context. Despite his tragically short life - he died from tuberculosis in 1942 when he was 25 - his prolific activity during his two years or so of recording, coming as it did at the beginning of the '40s, made him a key figure in the development of bebop. This great value 24-track collection comprises recordings which he made from the time he joined Benny Goodman's Sextet in summer of 1939, through to just before he succumbed to illness in June 1941, primarily with Goodman's band but also including other work, including a track from the legendary Minton's Playhouse jam sessions which were the genesis of bebop. It's an entertaining and enlightening snapshot of a career which had an influence way beyond its short span.