A couple engages two friends in a series of dares in exchange for money, with each challenge upping the ante in both reward and boundaries. 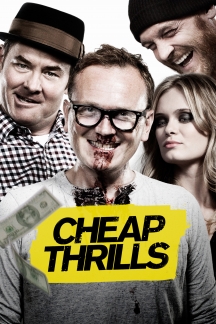 Cheap Thrills follows Craig, a struggling family man who loses his low-wage job and is threatened with eviction. In an effort to delay facing the music at home, he heads to a local bar and encounters an old friend. The couple engages the two friends in a series of innocent dares in exchange for money over the course of the evening, with each challenge upping the ante in both reward and boundaries.

Gleefully nasty and darkly hilarious, Cheap Thrills lives down to its title in the best possible way.

A thoroughly nasty piece of work, which doubtless will be the strongest selling point for this worst-case scenario about steadily escalating dares and degradations

One of the most involving works of cinematic misanthropy in years.

Cheap Thrills breezes by on a twisted idea, a fantastic cast, and a bunch of ethical quandaries that are both eerily uncomfortable and slyly fascinating at the same time.