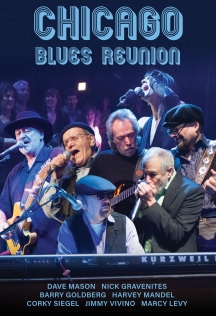 The Chicago Blues Reunion project is comprised of musical icons who have written and performed some of the most critically acclaimed songs of all time. From Paul Butterfield's anthem, "Born in Chicago" written and performed here by Nick Gravenities to Rock and Roll Hall of Famer Dave Mason's legendary hit, "Feelin' Alright", to Barry Goldberg and Gerry Goffin's #1 hit for Gladys Knight & the Pips, "I've Got To Use My Imagination". Here are the actual artists and actual songwriters performing their greatest hits which have helped shape the landscape of modern music. The Chicago Blues Reunion collection of legendary songwriters and artists have been played along side or been members of Traffic, Janis Joplin, Paul Butterfield Blues Band, Canned Heat, Eric Clapton, Steve Miller Band, The Electric Flag, Mitch Ryder and the Detroit Wheels, The Ramones, and many, many more. This is a joyous 60 minute concert, filmed at Chicago's nationally renowned Park West Theater, featuring these legends, all on the same stage, sharing their iconic musical history.