Children Of The Corn UHD

In their world adults are not allowed... to live. 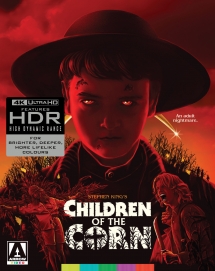 From the mind of celebrated horror author Stephen King, the man behind such classic terror tales as The Shining, Carrie, and It, comes one of his most chilling offerings yet. Linda Hamilton (The Terminator) and Peter Horton (Thirtysomething) star as a young couple who find themselves lost on the backroads of Nebraska, eventually winding up in the seemingly deserted town of Gatlin. But the town is far from empty. As the couple soon discover, it is inhabited by a twisted cult of murderous children, thirsty for another blood sacrifice... Available for the first time ever in Ultra High Definition, Arrow Video is proud to present a brand new 4K restoration of the film that launched one of the most enduring horror franchises of all time. Children of the Corn... they're an adult nightmare!

Children of the Corn works quite well for what it is, and remains the go-to reference for any kind of scary children.

Children of the Corn still holds up and in fact honors the pen and mind and spirit of the man who sculpted its soul. The movie looks better than it ever has... Extras are plentiful.

The film is full of beautifully evocative, broad, flat, sun-baked landscapes, in which even cornfields are made to seem menacing.