Children Of The Stars 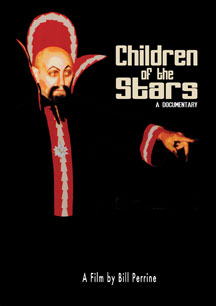 In 1973, Ruth Norman, a 73 year old widow and self described cosmic visionary purchased 67 acres of land in the mountains east of San Diego, California as a landing site for the Space Brothers, emissaries from the Intergalactic Confederation. Nearly 40 years later, a group of dedicated followers still await their arrival. At the Unarius Academy of Science death does not exist, Nicola Tesla was a Space Brother, Satan drove a Cadillac and science fiction is real. To relive their pasts the students film their own sci-fi extravaganzas with the increasingly extravagant Ruth Norman as the star and the lines between fantasy and reality dissolve. Using spectacular footage from original Unarius films and Hollywood Sci-Fi flicks to illustrate, comment upon, and subvert interviews with the remaining Unarius students, "Children of the Stars" covers millions of years, hundreds of galaxies and dozens of B movies to present a sympathetic look at faith and how people justify it in different ways. DVD contains 25 minutes of bonus material unavailable anywhere else

A compelling documentary on a 1970's cult that makes Scientology actually sound sensible. It's THAT CRAZY.

Everybody can be happy with Bill Perrine's Children of the Stars

The best thing ever... I think it just replaced Grey Gardens as my favorite documentary of all time.

Anyone interested in how people become enmeshed in fringe beliefs will find this movie fascinating, if somewhat disturbing.