Fighting the war to protect the nation 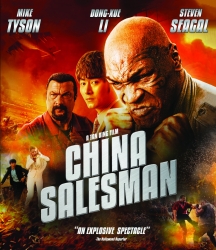 Based on a true story, CHINA SALESMAN takes us on a dangerous and epic adventure to Africa where a Chinese salesman comes face-to-face with a corrupt competitor over a prized telecom deal. Local tribesman KABBAH (Mike Tyson) and mercenary LAUDER (Steven Seagal) take up opposite sides in a brutal hand-to-hand fight while the entire region threatens to explode in a dangerous civil war.

A supercharged plot about a humble Chinese cellphone salesman who somehow averts a civil war in Africa, featuring explosions, bazookas, tanks and an eight-minute fight sequence between the action heavyweights. Sold!

The China Salesman has racked up some 1.5 million YouTube views (not all by THR on Saturday afternoon), showing that there's definitely some appetite for this sort of old-fashioned action romp still out there.