The Sequels to the Smash Hit 'Chocolate City' Franchise! 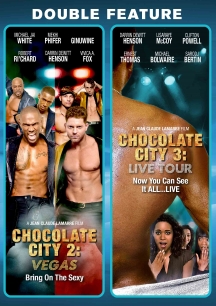 The exotic dancers from 'Chocolate City' get back together for a trip to Las Vegas and a chance at $500,000 in prize money to save the nightclub from foreclosure. They decide to enter a national stripper competition, and must travel to Vegas to try their luck at winning the competition.

After their unprecedented win at the National Stripper Competition in Las Vegas the year before, the Chocolate City team of strippers have had some ups and downs. Michael, their lead dancer suffered a tragic loss when his mother unexpectedly passes. Their Reality show, after their Vegas win, experienced low viewership and was not what they had expected, forcing them to withdraw from the Network production altogether. Now its time to get back to what they do best - dance. With the help and support of Mr. Williams, the Chocolate City Dancers will now prepare for a multi-city tour to regain their mojo, but once again personal challenges and internal beefs threaten to derail their new plan.

The fun and fantasy returns in 'Chocolate City 2: Vegas'