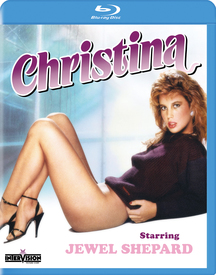 Famed B-movie vixen Jewel Shepard (HOLLYWOOD HOT TUBS, RETURN OF THE LIVING DEAD) stars as Christina Von Belle, the insatiable young heiress known as `The Playgirl Of The Western World.’ But when Christina is kidnapped by a ruthless squad of lesbian commandos (led by Euro-starlet-turned-porn-queen Karin Schubert of BLUEBEARD and BLACK EMANUELLE), she is forced to submit to a shocking ordeal of carnal degradation. For a frightened girl bound by more than desire, is there any limit to the ecstasy of the depraved? Ian Sera (PIECES) and former Miss Bahamas Josephine Jacqueline Jones (BLACK VENUS) co-star in this sumptuous sex saga from writer/producer Harry Alan Towers (LOVE CIRCLES, VENUS IN FURS, 99 WOMEN), now re-mastered in luscious high-definition for the first time ever!