The final battle in the cult animation series - who will survice the City of Rott and what will be left of them? 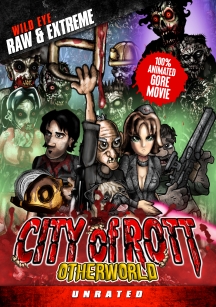 The final, gore-filled battle in the cult animation series - Join Fred, Max and Sarah as they fight their way out of the Otherworld. Hunted by the Stalker Demon and hordes of the living dead, the trio must slice and dice everything in sight if they're to reach freedom at the Bridge of Rott in their quest to escape dissection and destruction!

The best was saved for last, non-stop splatter and madness.

Lives up to pervious entries in the long running, gore soaked series...

A very ambitious project, 'City of Rott' is rather entertaining.

'must-see' had a video-game-like feel in the way that the story and action played out.