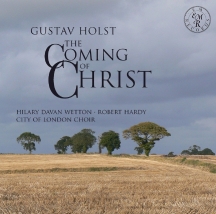 'The Coming of Christ', by Gustav Holst, was commissioned in 1927 by the Dean of Canterbury Cathedral, George Bell, as a setting of a text by John Masefield, words and music together forming a Mystery Play reminiscent of mediaeval religious dramas. Although the work received its première the following year to critical acclaim, it was thereafter abandoned – until its resurrection at The English Music Festival in 2010; and it is here presented in recorded form for the first time.