This is the first recording of the music of the American female composer Edith Hemenway. 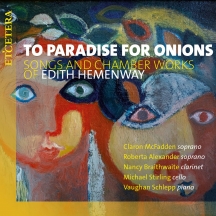 This is the first recording of the music of the American female composer Edith Hemenway. Organ was her principal instrument for several years until she discovered the joys of the art song. She attended the New England Conservatory of Music where she received a Master's degree in Vocal Accompaniment. The Boston Children's Opera Company, since defunct, commissioned two operas, ''Benny and the Bear'', performed in schools throughout New England, and ''The Twilight of Magic.'' The latter premiered at The Third Street Music School Settlement in New York, and was then performed by Opera on the Go as part of their traveling repertoire. ''Goldilocks,'' another opera for young children, was also commissioned and performed by this group. The librettos for these three operas were written by her daughter Sarah. A fourth opera, ''Doctor Know-It-All,'' conceived for an older audience and involving a larger cast, was performed by voice students at the University of Rhode Island. During this period, Ms. Hemenway also received two Composer-in-Residence grants. While on a two-year stint in Savannah, Georgia, she became friendly with Nancy Braithwaite, and composed two works for her: ''Asian Figures'' and ''A Child's Garden.'' Other widely performed works by Ms. Hemenway have been the works song-cycle ''Wonderings'' on poems by Kenneth Patchen, and the popular ''Four Duets on Poems'' by Langston Hughes. Several other song-cycles and chamber works have been premiered by Nancy Braithwaite and her ensembles in The Netherlands including ''Questions of Travel'' and ''Doors''.

This new recording is performed by critically acclaimed soprano Claron McFadden, accompanied by soprano Roberta Alexander with Nancy Braithwaite on clarinet, Michael Stirling on cello and Vaughan Schlepp playing piano. This is a really interesting disc of the relatively unknown works of Edith Hemenway.

These six sets of songs and instrumental chamber works by American composer Edith Hemenway (arranged for varying combinations of voice, clarinet, cello, and piano) are all presented here in world-premiere recordings. Hemenway began her musical career as an organist, but soon discovered that she had a particular talent for composing art song; she later went on to write several children's operas as well. The songs on this program are performed by sopranos Claron McFadden and Roberta Alexander, who are excellent, but what really grabbed me were the pieces written for clarinetist Nancy Braithwaite-who is also the performer on these recordings, alongside cellist Michael Stirling and pianist Vaughan Schlepp. Hemenway's writing navigates beautifully that narrow space between bracing modernism and aching lyricism-Asian Figures has a particularly vinegary loveliness-and the performances on this disc are outstanding. For all classical collections.

...Hemenway was an art singer, tackling high minded works and creating several of her own that would be used to turn kids on to culture. The kind of recital recording that you find yourself liking even if you try hard not to thinking it's just too much for eggheads, the small group and the two vocalists know how to bring out all the best in these works showcasing specialized music well worthy of wider attention. The diversion you have been looking for to really cleanse the palette.