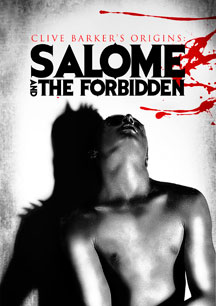 In 1970s Liverpool, Clive Barker and a small group of friends from college made two short films. "Salome" (1973) and "The Forbidden" (1978) feature early footage of Barker, who also did most of the special effects, and Doug Bradley, who went on to fame as Pinhead in the "Hellraiser" films. Also included are interviews with Barker, Bradley and other key players. Contains graphic violence and nudity. "Salome" is an 18-minute version of the tale based on the Oscar Wilde play and "The Forbidden" is a 35-minute short.

Diehard fans of Barker will be delighted to see that his two student films have made their way to DVD.

An interesting curiosity, 'Salome' and 'The Forbidden' offer the earliest glimpses into the mind of an artist who has left an indelible legacy in the horror genre.

A nice addition to any Barker fan's DVD library.

It's an interesting opening pawn move for Barker at the beginning of his career.