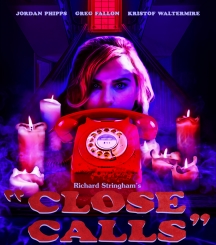 Being grounded is nothing new for Morgan (Jordan Phipps). With the house to herself, a fridge full of food, and a box of drugs stashed in her closet, it's "party time" as usual for this spoiled teen brat. All she has to do is tend to her sick grandma when her father leaves. But then... the phone rings. As the night closes in, Morgan is soon haunted by visions of her dead mother, attacked by her Grandma, and terrorized by a series of bizarre phone calls. Between these disturbing calls, the drugs she has taken, and a few surprise visits from some unexpected guests... Morgan's paranoia grows as she nowbelieves everyone is out to get her. To make matters worse, she keeps forgetting to give Grandma her meds. Will Morgan survive this night of terror? Or will she end up losing her mind throughout the course of these "Close Calls"? This psychedelic, fever dream of a film also features a suspenseful score by Rocky Gray ('The Barn' & '10/31') and Visual Effects by Les Galusha ('Contracted').