It's BACK! It's BIGGER! It's BETTER! And it's the 3-D Cult Classic Western that started it all! 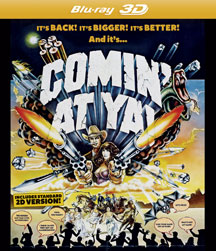 Tragedy strikes as two ruthless brothers kidnap a bride during her wedding. Hurt and angry, H.H. Hart (Tony Anthony) begins his quest to find the love he lost, and take vengeance upon the wicked. The film features many 3D effects, many of which are intended to "fly off the screen" at the audience.

Comin' at Ya! is more often than not a stodgy, dodgy amusement strictly suited for ironic enjoyment after all these years.

This is 3Dsploitation, pure and simple...It's hilarious, and the entire film is so earnest that it's hard not to laugh... I ended up really won over by it.

In a barrage of flying arrows, snakes and old-school 3D thrills COMIN' AT YA! certainly delivers... matching quintessential 80s-style 3D with cutting-edge contemporary technology is going to make for the ultimate 3D experience for movie-goers.

A wild and wooly action-adventure with a fistful of full-tilt, slam-bang 3-D thrills and spills.