Connee Boswell - she began her career as Connie Boswell, but decided to change the spelling of her name in 1945 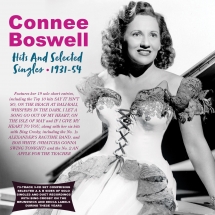 Connee Boswell - she began her career as Connie Boswell, but decided to change the spelling of her name in 1945 - was a member of the brilliant, influential and hugely successful vocal trio The Boswell Sisters, who had a string of hits in the 1920s and '30s until retiring in 1936 (see "The Boswell Sisters Collection 1925-36" Acrobat ADDCD3208). Connee, who had already been making solo records and having solo hits, carried on after that, and had hits through into the 1950s. This great-value 73-track 3-CD set comprises selected A & B sides of her solo singles and duet recordings with Bing Crosby on the Brunswick and Decca labels during these years, recording variously with the orchestras of Victor Young, Bunny Berigan, Ben Pollack, Bob Crosby, Harry Sosnik, Jimmie Grier, John Scott Trotter, Russ Morgan, Sy Oliver and Bob Haggart. It includes all her solo chart entries and those with Bing Crosby - twenty-five in total - including the No. 1s "Bob White" and "Alexander's Ragtime Band" with Crosby, and the Top 10 hits "Say It Isn't So", "On The Beach At Bali-Bali", "Whispers In The Dark", "I Let A Song Go Out Of My Heart", "On The Isle Of May" , "If I Give My Heart To You" and "An Apple For The Teacher". She was a highly-regarded performer across the jazz, swing and pop spectrum, and this substantial collection offers an entertaining window onto her talent as a hit-maker whose chart career lasted over a quarter of a century.

During a time like today when every singer sounds like every singer, this collection is a fresh wind of female voice.