"Coordonne is a young duo that was born in the rehearsal rooms of the Royal Conservatory in Ghent. 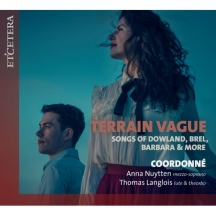 "Coordonne is a young duo that was born in the rehearsal rooms of the Royal Conservatory in Ghent. Together they went to England to study the music of John Dowland under the guidance of Emma Kirkby and Jacob Heringman, among others. It would prove to be an incredibly inspiring experience, which led directly to this recording. ""As a duo made up of a lutenist and a singer, it was practically guaranteed that one day we would come into contact with John Dowland's music, and the many lute songs that have been published in various editions in particular. For us, however, things happened in reverse: we found each other as musicians through our common interest in his songs. On this, our first CD, we try to identify the elements in his music that so appeal to us -- not only through his own work, but also through music by his contemporaries and works by more modern chansonniers. As a duo we have built up a small collection of such works over time, and it's because of this that we decided to record songs by composers with a variety of nationalities, backgrounds and personalities, as well as from totally different periods; these works nonetheless come together perfectly in a programme thanks to their musical, textual and thematic similarities."