Weeds delivers a blistering set of Italian themed tunes backed up by one of the pre-eminant organs bands in jazz today! 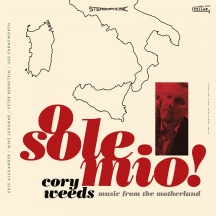 The results speak for themselves: swinging bop lines executed by all, crackling rhythm section accompaniment and interaction, and an ensemble sound that underscores the values of swing, groove and participatory interaction over a carefully selected set of compositions--thanks to the support of Giulio Recchioni and the Italian Cultural Centre--that celebrate through reinvention and interpretation some great Italian music ("O Sole Mio," "Toma A Surriento"), as well as compositions taken from the rich history of contribution that Italian-Americans have brought to jazz and the American popular song (Marmarosa, Corea, Martino, Mancini).

Although to some, perhaps, the ideas presented here may appear on the surface to be disparate and tangentially connected: a jazz version of "O Sole Mio," a fifth instrumentalist added to a longstanding quartet or even the Hammond B3 organ in jazz (a relatively late addition to the music's instrumentarium with an unusual historical pedigree of roller rinks and makeshift churches), jazz has long been about thwarting normative conventions and looking for points of intersection that connect and unite players and sounds that span nationalities, race, language, gender and musical history.

This sax tribute to all things Italian might have been recorded in New York with a first class crew that could do this all day long for the next Scorsese pic, they ain't doing this for a bunch of organ grinders and monkeys on Mott Street. A hip, happening bouncing and bopping set, this takes chestnuts you thought you were over and done with and roasts them one more time for you to get your groove on. This is a trip through the Big Apple that won't turn up any worms. Dig it.