This album represents many of Craig’s influences. 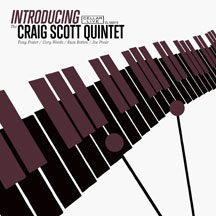 Throughout the years, most of Craig Scott's work has been on drums, until the summer of 2012, when he was teaching at the Douglas College Jazz Camp. During the faculty noon hour jazz concert, Craig asked Bob Rebagliati, the camp coordinator and master music educator to sit in on drums, so Craig could play a tune on vibes. Afterwards, Cory Weeds, the great saxophonist and impresario, who was also on faculty and performed along side him at the concert, approached him about doing a weekend at The Cellar Jazz Club. Craig was thrilled, and began lifting arrangements from the albums that Milt Jackson recorded with Ray Brown and tenor saxophonist Teddy Edwards. The weekend was both successful and spectacularily fun, and ultimately resulted in the opportunity to record our group. This album represents many of Craig's influences.