An African witch doctor summons a demon like creature to torture an American and her family. 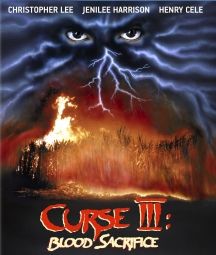 The legendary Sir Christopher Lee (Nothing but the Night, Dracula: Prince of Darkness) stars in this chilling thriller. An African witch doctor summons a demon like creature to torture an American (Jenilee Harrison, Three's Company) who interrupted a tribal ceremony in an attempt to keep them from sacrificing a goat. As a result, a witch doctor puts a curse on her and her family. It isn't long before a demon from the sea is stalking the family and anyone else they know. Henry Cele (Shaka Zulu) co-stars.

The so-so B film was incredulous, but I'm a sucker for even only barely acceptable Christopher Lee films and ones that have witch doctors fully dressed for their evil role.