IT'S TIME TO PREY 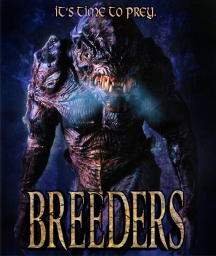 It's an invasion of the most personal and terrifying kind. When a meteorite crash lands onto a Boston college campus and an alien beast is released, only one man understands its mission to mate. From the depths of an all girls college, the grotesque monster stalks his prey in a cat-and-mouse chase until the final conflict where only one species can survive.

Bizarrely entertaining... it has just enough of the strange and inept charm to make it worth watching.