H.R. With The Scotch Bonnets - Quest 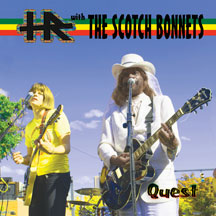 Performing a mixture of songs written by H.R., Scotch Bonnets frontwoman Lady Hatchet, and former Pietasters keyboardist Pablo Fiasco (The Players Band, Left Alone), H.R. & The Scotch Bonnets recorded this tasty collection of songs for Morphius Records at Lord Baltimore Recording Studio, shortly after returning from a tour of the midwest. The release is musically akin to H.R.'s solo work on various Human Rights albums, but also features Lady Hatchet's vocals on several songs. Scotch Bonnets, the brainchild of vocalist/guitarist Lady Hatchet (nÃ©e Kristin Forbes) is an active touring unit that has released several of their own recordings, including the 2013 debut album "Live Ya Life" and other studio efforts. They recently contributed a track for a Rancid Tribute album to be released this year on the Hellcat label. Lady Hatchet has also worked with various other heavyweights in the music world, including a duo album with Fishbone frontman Angelo Moore, a recent collaboration with Django Rhinehart, and rock albums with a host of artists including Jaabs and others, as well as played guitar and sang with the late Claudius Linton in the band Kingman & Jonah (Sign Time, 2009) HR with the Scotch Bonnets will be touring to promote the release of this CD December 4th-9th, in Washington DC@ Black Cat, in Baltimore at The Crown, @ Kung Fu necktie in Philadelphia, and at 2 venues to be confirmed in NYC, and Brooklyn.