''Rollercoaster'' is the fourth studio release from Dan Baird and Homemade Sin. 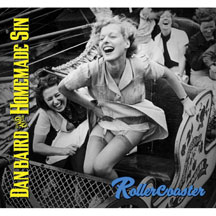 Rollercoaster is the band's fourth studio album - . Produced by guitarist Warner E. Hodges, featuring thirteen tracks with some reverting back to the classic, much loved Georgia Satellites sound and others continuing to push boundaries in the opposite direction. Featuring songwriting collaborations with Otis Gibbs, Will Hoge and David Newbould, the album veers from balls to the wall rockers - Shake It Till It's Sore and Licka Sense, to the beautiful Do My Worst and ending with the heartfelt pain to fallen comrades, Bury Me Standing. Fans of Tom Petty, AC/DC, Creedence Clearwater Revival, The Band, Led Zeppelin and Aerosmith will find plenty of familiar territory.

So, who are Homemade Sin? You may remember Dan, he was the lead singer and chief songwriter with '80's roots superstars, The Georgia Satellites and the composer of, "Keep Your Hands To Yourself". Every night in America, it is estimated that at least eight bands will be covering that number. Not bad for a song that has just celebrated its thirtieth birthday.

Joining Dan is fellow ex Satellite, drummer Mauro Magellan and founder member of Americana Hall Of Fame Lifetime Achievement winners Jason And The Scorchers, guitarist Warner E. Hodges. The lineup is completed by Micke BjÃ¶rk on bass. The band has a reputation for being one of the best live acts on the circuit, appearing at the Sweden Rock festival in 2009 and 2016, Hard Rock Hell in 2011 and 2012. They also headlined the prestigious Kilkenny Festival in Ireland in 2012. 2017 sees them at the Ramblin' Man Fair Festival UK, Zwarte Cross Festival NL, Wildfire Festival UK , Middle Of Nowhere Festival UK and Boogie Fest AUS. On the road for most of the year and returning to the UK for six special concerts featuring special guest Otis Gibbs to round the year off in November.