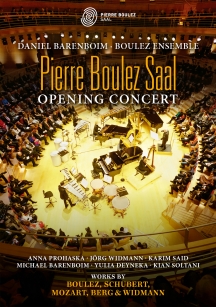 In the Opening Concert of the Pierre Boulez Saal, Daniel Barenboim, the Boulez Ensemble and renowned soloists are celebrating the idea of what this new concert hall of the Barenboim Said-Academy in Berlin stands for: to create a space where beloved classics, modern masterworks of the early 20th century, and music of our time can be heard side by side and inspire audiences and performers alike.The Boulez Ensemble, which has been founded especially for the new concert hall, consists of musicians drawn from the ranks of the Staatskapelle Berlin and the West-Eastern Divan Orchestra and of professors from the Barenboim-Said Akademie. For its concerts, it will regularly be joined by guest artists (both singers and instrumentalists) in order to cover a wide array of musical styles and to combine flexibility with a fine sense of each separate musical voice.Together with conductor Daniel Barenboim the Boulez Ensemble takes its audience on a musical journey from the 18th century to our days. Soprano Anna Prohaska and clarinettist Jörg Widmann present Schubert’s lyrical scene Der Hirt auf dem Felsen, while the latter also partners with the Ensemble’s strings in Mozart’s Piano Quartet. Karim Said and Michael Barenboim take on Berg’s Chamber Concerto, and Widmann performs his own Fantasy for Solo Clarinet. In honour of the recently deceased French composer and conductor Boulez, Pierre; to which the concert hall has been dedicated, the programme is opened by his fanfare-like Initiale and closed with sur Incises, for three pianos, three harps, and three percussionists.