Schumann’s orchestral work is transformed in a captivating drama 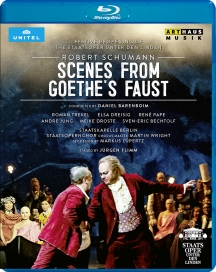 The Staatsoper Berlin is back in ist place of origin: Unter den Linden! After major renovations, it reopens with Schumann’s Scenes from Goethe’s Faust, conducted by Daniel Barenboim. Under the direction of Flim, Jürgenm and in the sets of acclaimed German artist Markus Lüpertz, Schumann’s orchestral work is transformed in a captivating drama. In the glow of the renovated opera hall Daniel Barenboim and the Staatskapelle Berlin perform alongside soloists such as Roman Trekel, Elsa Dreisig and René Pape. Besides the vocal parts, the main characters Faust, Gretchen and Mephistopheles are embodied by the renowned actors André Jung, Meike Droste and Sven-Eric Bechtolf.