The Best of the Danny Kaye Show: Six uncut episodes of the Emmy-winning 1963-1967 variety show. 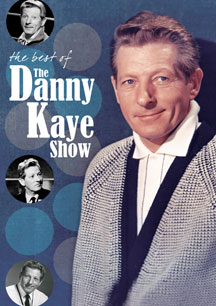 Danny Kaye was at the height of his popularity when The Danny Kaye Show debuted on CBS in the fall of 1963. A pair of Broadway hits ï¿½ Lady In the Dark and Letï¿½s Face It ï¿½ and a succession of classic films including The Secret Life of Walter Mitty, The Inspector General, Knock on Wood, Up In Arms, The Court Jester, Hans Christian Andersen, and White Christmas made Danny Kaye one of the biggest stars in show business. His international humanitarian work for UNICEF, and sold out concerts at places like the London Palladium and the Palace Theater in New York helped make Danny Kaye a worldwide sensation. He won the Emmy Award for best variety performer in 1964, and the show was honored with three more Emmys, including outstanding variety series. The Danny Kaye Show was the perfect showcase for its starï¿½s unequaled range of talents. In this collection of six uncut episodes ï¿½ available now for the first time - Danny sings with Ella Fitzgerald, Nana Mouskouri and Harry Belafonte. He sings and dances with Liza Minnelli and Gene Kelly, and deftly clowns his way through comedy sketches with Art Carney, Rod Serling, Jackie Cooper, and a certain perennially 39-year old legend of comedy, who makes an unannounced cameo appearance. Also featured in this collection are Michelle Lee, Buddy Greco, John Gary, Joe & Eddie, Lovelady Powell and Alan Young. Series regulars include Harvey Korman, Jamie Farr, Joyce Van Patten and orchestra leader Paul Weston. Among the numerous gems found in The Best of the Danny Kaye Show: Danny conducting the Television City Philharmonic, a spoof of The Twilight Zone with Rod Serling, and performances of Danny Kaye classics ï¿½Pavlovaï¿½ ï¿½ written by Dannyï¿½s wife Sylvia Fine and originally seen in the film The Kid From Brooklyn, and ï¿½Ballinï¿½ the Jackï¿½ from On the Riviera. Dannyï¿½s other numbers include, ï¿½You Make Me Feel So Youngï¿½, ï¿½Pennies From Heavenï¿½, and a rollicking duet with Harry Belafonte on ï¿½Hava Nagila.ï¿½ Whether experiencing the joy that is Danny Kaye for the first time, or revisiting his extraordinary gifts, viewers of all ages will find the irresistible and legendary entertainer at the top of his game on The Best of the Danny Kaye Show.

Sure to please fans, especially since only a couple of Christmas episodes of this show have been released up to now.

This is a quite enjoyable overview of a classic variety series that comes highly recommended.