ASC Records are proud to continue their series of releases by Daryl Runswick with 'Late Jazz'. 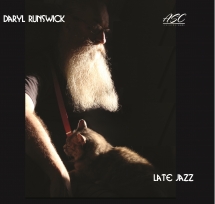 Two of the tracks feature Daryls specially-adapted guitars, the fretless alto and the piccolo bass, and four have vocals, but the basic unit is piano, sometimes solo, sometimes with bass, sometimes bass and drums . The album is called the album Late Jazz not only in honour of 'that jazz time of night' but also because, unlike all Daryls other ASC releases, these are not historic recordings from the 1970s but new ones, often based around his One Man Show, in which most of them featured. So they're late-period Runswick. The compositions too are recent (except of course the standards), all but one written since the Millennium. (Sulkin is from the 1990s.)