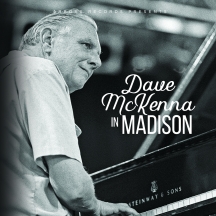 From the 1999 edition of Leonard Feather and Ira Gitler's The Biographical Encyclopedia Of Jazz:

''McKenna brings to the piano a prodigious left hand that is a rhythm section unto itself to go along with his dexterous right. Factor in the vast storehouse of songs at his fingertips and you have a most resourceful performer, celebrated for his theme melodies.''

McKenna (1930-2008) breathes life into that description in this album recorded in the early 1990s at Farley's House Of Pianos in Madison, Wisconsin and only recently released.

One of the album's treasures is McKenna combining Walter Donaldson's 1930 ''You're Driving Me Crazy,'' with Count Basie's ''Moten Swing,'' which Basie wrote using the Donaldson song's harmonies. I was surprised to learn today that there is video of McKenna playing that medley on a Steinway C grand piano that Farley's House Of Pianos had recently restored. The instrument was getting raves from everyone who played it. We don't see much of McKenna but his hands--and a glimpse of him checking his tune list as the video fades. That's all we need. His hands, note choices, fluid technique--and the music-- show his mastery.

Those theme melodies that Feather and Gitler mentioned include a fascinating 15-minute string of songs by Vernon Duke, two songs called ''Soon''--one by Rodgers & Hart, the other by Gershwin--and a ''Time'' medley combining Gershwin, Youmans, Bernstein, Cahn and others. House Of Pianos proprietor Tim Farley's liner note remembrances of the pianist are a bonus.

Doug Ramsey on Jazz and other matters...

Too many things have a way of getting forgotten. If you are unfortunate enough not to have experienced pianist McKenna, here's something to think about. I had been hired to start a jazz label. One of my first calls was to McKenna at a hotel in Boston. He was recording on a handshake with Concord at the time and expressed too much loyalty to Carl Jefferson to leave the stable. In coming hedge fund owners changed that dynamic around. The change led him to jazz fan Mat Domber while I was off in other directions. The sum total of all that is this live date recorded well away from his stomping grounds. It was never intended to be a record and it's nice to have it escape on a label that'll know what to do with it. Maybe the greatest saloon piano player of our times, this is him simply kicking it out, keeping the audience in the palm of his hand. Whether it was ever supposed to be a record or not, this is a master class of a master at work, doing it solo and swinging like he invented it. A winner throughout.