In hard swinging fashion Dave Robbins and his sextet come together to pay tribute to a patron of Vancouver Jazz, Joan. 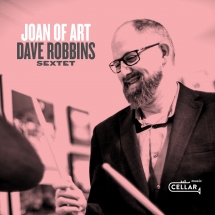 For 20 years Joan has been a major contributor to many things jazz in Vancouver, BC, Canada. Having a special affinity for drummer Dave Robbins, she offered Dave an opportunity to do a recording. The 11 tunes on the aptly titled Joan of Art - all but two composed by Dave - exemplify what Joan and any fan of intensely swinging and vigorously expressive jazz loves. Hard swinging and straight ahead!

A regional luminary in British Columbia, Robbins has kept this crew together for 20 years. They finally got their chance to swing on wax and they whack it out of the park. A mostly original set that finds the crew delivering hard, swing is alive and well in the Pacific Northwest. Just a dazzling date where everything works perfectly all the time, this is a valentine to jazzbos everywhere.