David Bowie - The Calm Before The Storm 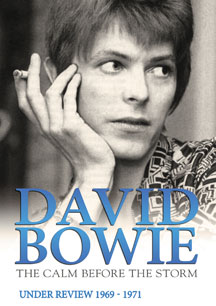 David Bowie's first record was issued as early as 1964 and so began, in the view of many, the most creative career in the history contemporary music. But it was in 1969 and the release of his startling 'Space Oddity' that Bowie first gained the recognition that has accompanied his music since. And although it was not for another three years, when the Ziggy Stardust album hit the stores, that his name would forever more be linked with pure, unadulterated genius, between '69 and late '71 the Thin White Duke made three albums that have not only stood the test of time, but for many fans, include his finest work. This film documents Bowie's career from the start, but focuses most notably on the period during which he made his second album (initially, simply called David Bowie but later re-christened Space Oddity to avoid confusion with his debut), his third, the critically acclaimed Man Who Sold The World and the pinnacle of his pre-Ziggy career, Hunky Dory. The film includes contributions from many Bowie associates from this period including drummer John Cambridge, guitarist and harmony vocalist John Hutchinson, guitarist Keith Christmas, Bob Solly from early Bowie outfit The Mannish Boys, early mentor John Peel (in one of his very last interviews), DJ and early Bowie champion Annie Nightingale, plus many others. The programme also includes rare archive, seldom seen footage and photographs plus a host of other features which all together make for the finest film yet on this period of David Bowie's life and career.