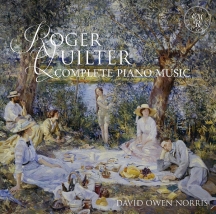 Roger Quilter was born into a wealthy family and, defying all social and professional expectations for a young man with such an upbringing, attended the Frankfurt Conservatory, where he studied piano and composition, and became closely associated with Percy Grainger, Cyril Scott, Norman O'Neill, and Balfour Gardiner: the five were known as the 'Frankfurt Gang'. Although best known as a song composer, Quilter nevertheless wrote a substantial body of piano music, which is represented on this disc. From the delicious lightness of the Suite from 'Where the Rainbow Ends' to the musical and emotional depth of 'Summer Evening', this is music that is exuberant in its variety.