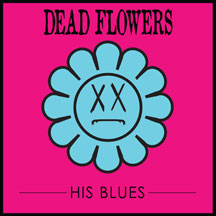 Less than a year after their first release, "For You," Dead Flowers were back in the studio working on their sophomore record, "His Blues". Unlike their first record, which maintained a more alt-country-Americana-rock sound, "His Blues" is a full on aggressive, heavy, guitar-assault rock and roll album, matched only by the thunderous rhythm section. Producer Jason Robert Burt brought Dead Flowers to The NEST in Dripping Springs, Texas, for ten days of tracking and mixing through a Wunder console and had one thing in mind: make this album as heavy as possible. While no lyrical emphasis was lost from front man Corey Howe, tracking live and loud was the game plan for this second record. Vince Tuley manned the fuzzed out, octave driven lead guitar. Evan Johnson is behind a 1960's vintage Ampeg B-18N Portaflex and Ed Chaney tuned his drum kit as low as possible for some parts. All of these elements came together to create the low and heavy sophomore LP from Dead Flowers. Ladies and Gentleman: "His Blues". 180 Gram vinyl with CD copy of full album