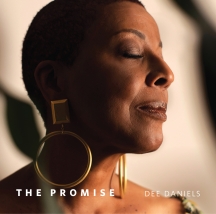 Truly a revelatory album from one of North America's most beloved jazz and gospel vocalists. The Promise is the result of a journey with breast cancer which inspired the artist to write and produce a career-changing collection of spiritual songs. Already a winner of the 2020 Western Canadian Music Awards' Best Spiritual Artist and numerous Global Music Awards, The Promise is one of the most anticipated gospel and spiritual albums of the year in a time when we all need inspiration.

'Her four-octave range enthralls an audience. Whether she's performing in an intimate jazz club or fronting a big band or full symphony orchestra, she seems relaxed, comfortable and in command at all times. Like Diana Krall, she accompanies herself on the piano with exceptional ease and artistry.'

'...The raucous blues ended with a high note the likes of which I don't think I've ever heard. Daniels held that note until it was thin as ribbon, then fattened it out and pulled it down into the lowlands. That's the blues!...

'...she used the extraordinary range and velvety texture of her voice like an instrument, wrapping its smoky texture around each word of a lyric to give the song added meaning, nuance and expression.'