When a series of murders rocks St. Louis, the investigation will lead to a deranged veteran and an underground organization of white-collar vigilantes 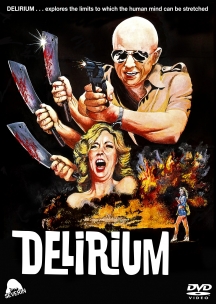 For his feature film debut, director Peter Maris (MINISTRY OF VENGEANCE, DIPLOMATIC IMMUNITY) took portions of an unfinished urban conspiracy thriller and added a new psycho-killer procedural to create what may be the most unusual/vicious proto-slasher shocker of the '70s: When a series of savage murders rocks St. Louis, the police investigation will lead to a deranged Vietnam vet, an underground organization of white-collar vigilantes, gratuitous nudity, graphic violence and an absolute masterclass in low-budget regional filmmaking. One of the very first Section 2 Video Nasties, this longtime VHS rarity - also known as PSYCHO PUPPET - is now presented on disc for the first time ever, restored from the only known 35mm print in existence.

Unique '70s exploitation... A hybrid of gory horror, cop thriller and conspiracy drama, and an early entry in the American slasher cycle.

Genuinely peculiar, convincingly nasty... The first psycho-killer movie to exploit the graphic nature of its murders. The maniac is especially brutal.