They will make cemeteries their cathedrals and the cities will be your tombs... in 4K UHD and remastered Blu-ray! 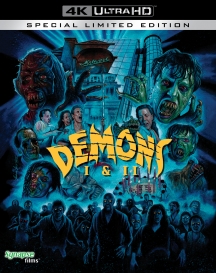 The Demons movies are perfect films. Seriously, these movies make me overjoyed every time I watch them. I’m insanely excited that this set is in my collection and I’ve run around the house with my ticket for the Metropol many times already!

From a visual standpoint, both films look great throughout. Also, pacing is never an issue since both films feature an ample amount of gore at brisk intervals. And when it comes to the special effects, they are very effective and appropriately grotesque. A standout FX moment is a scene where a woman is hunched over on all fours and a demon hatches out of her back.

Demons has never looked this good, and will likely never receive a release this robust again. It’s well, well, well worth the investment for any Italian horror fan.

—Austin Trunick, Under The Radar Magazine

At the end of the day, Demons and Demons 2 are fright flicks made for fans, by fans (who just so happen to be professional filmmakers); all the right notes are hit, and hit hard, and the end result is every gorehound’s wet dream!

And truly, it’s a blast from start to finish with little time wasted.