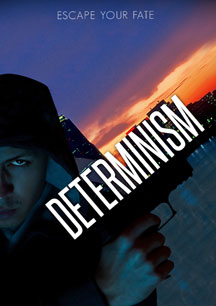 Set in a racially charged university, DETERMINISM pinpoints on Alec, an alienated Indian American college student who's run out of options. After flunking out of school and the collapse of his father's finances, Alec sets his sights on the best selling commodity available: DRUGS. Honing in on a local dealer's stash and enlisting the help from his ex-cokehead best friend Tristan, Alec unwittingly sets off a bloody chain reaction of violence that may lead to the point of no return.

The resurgence of independent film-making in the past few years has been a glorious process to watch. Without this surge of young men and young women taking interest in this art form, we would not have such films as Lost In Translation, Memento, or even Paranormal Activity (good or bad, you be the judge). Thrown into this mix of independent film-makers are two young and energetic identical twins named Ranju and Sanjit Majumdar with their crime drama, Determinism.

All in all, Determinism is strongly recommended in terms of its tight script, subtle experimentalism and a daringly provocative message that no one can afford to discount.