Devo - Men Who Make The Music/Butch Devo & The Sundance Gig 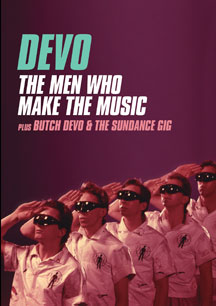 The Men Who Make the Music combines concert footage from DEVO's 1978 tour with music videos and interstitials featuring a vague story about DEVO's rocky relationship with "Big Entertainment." As for the bonus program, Butch Devo and the Sundance Gig, Jerry Casale says, "In January of '96, we closed Sundance Film Festival. We wore 20s style prison suits and dished out classic DEVO songs to an unsuspecting audience of Hollywood elite."

...Captures the band at a great time when they were young, energetic, and bursting with ideas... An interesting snapshot of their first commercial releases... Recommended.

This entertaining snapshot of two key periods in Devo's history--first when they were on the cusp of stardom and then when they blazed a comeback trail--is a reminder of just how innovative and musically adept these fun-loving oddballs are and how wildly entertaining and unpredictable their concerts can be. Recommended to all pop music enthusiasts.