Dicks - The Dicks From Texas

The real deal true story of Texas punks The Dicks! 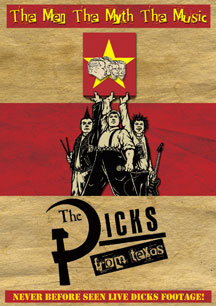 Gary Floyd would go around town in Austin, Texas putting up posters advertising 'The Dicks' with crazy ass pictures and promises that first 10 people with guns drink for free. It was a wild and crazy time in Austin, back when 'keeping Austin weird' got you thrown in jail. Gary was a flamboyant outwardly gay personality with a voice that still rivals the hardest heaviest bluesiest singers from Texas or anywhere else. He ran into Buxf Parrot and Glen Taylor at Raul's Bar on Guadalupe and the Dicks became a reality. Pat Deason joined the band just in time for the legendary first live performance at the Armadillo World Headquarters. The Dicks were together for nearly four years and put out 'Dicks Hate the Police" 45 and two albums, "Live at Raul's" and "Kill From the Heart" which have lived on for coming up on four decades, inspiring other musicians and fans with songs like "Bourgeois Fascist Pig," "Dead in a Motel Room," and "Dicks Hate the Police." The Dicks never sold out, never budged one fraction from their militant principles at the cost of no big record deals and acclaim. What they got in return was the respect of longtime hardcore followers who still turn out at the rare live reunion shows where the Dicks still deliver.

Pays tribute in the best way possible to a band like these guys - it's raw.

Well worth a watch!