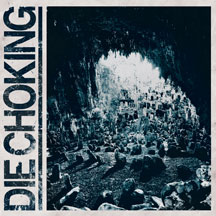 This is the CD version of the debut album from Philadelphia's unchained grind trio, DIE CHOKING, co-released with New York-based THE COMPOUND RECS. who released the LP version. "III" sees the band delivering seemingly implausible heaviness delivered at an absolutely unstoppable velocity, the eleven tracks on III deliver even faster BPM-rates and more complicated arrangements than the band's prior releases, merging more elements of hardcore punk and crust with their blinding speed/grind metal. Socio-political topics as intense as the music itself permeate each blazing anthem, which continue the ongoing theme carrying through from their smoldering self-titled release and subsequent II 7" releases, with tracks XI through XXI. With an already unfuckwithable track record built through their prior releases and their insatiable need to play their tunes at maximum speed in the live setting as often as possible, DIE CHOKING - featuring ex and current members of TOTAL FUCKING DESTRUCTION, COP PROBLEM, and BURDEN - is about to take things to the next level with their debut full-length. All in all, "III" is one of the heaviest grindcore albums ever conceived. Written during the shitty Northeastern Winter months, it is an album stripped of overproduction, performed with devastating efficiency, and dripping with a foul aggression that is frequently absent in today's extreme music landscape. "III" was recorded, engineered, and mixed by Will Yip (LAURYN HILL, CIRCA SURVIVE, COP PROBLEM) at Studio 4 and mastered by Brad Boatright at Audiosiege (BAPTISTS, FROM ASHES RISE, NAILS). There are no samples, no triggers. The band simply drilled the takes until they hit it. The debut album from Philly's most unhinged act is one of the most violent, high-speed releases of recent months!A must have for fans of BRUTAL TRUTH, NAILS, INSECT WARFARE, NOISEAR.