Lalo Schifrin is an Argentinian pianist, composer, arranger and conductor who studied and played in France in the early '50s 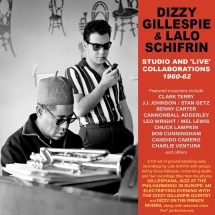 Lalo Schifrin is an Argentinian pianist, composer, arranger and conductor who studied and played in France in the early '50s before forming his own jazz orchestra in Argentina. He first met Dizzy Gillespie in 1956 and wrote the extended work "Gillespiana" for him. While in New York in 1960, he was offered chance to join Gillespie's Quintet as pianist, and over the next two years recorded a number of sessions with Gillespie as well as performing with Gillespie at recorded concerts and club dates, which established his reputation, providing the basis for his becoming a celebrated composer of film music in later years. This 2-CD set comprises studio and 'live' recordings from the albums "Gillespiana", "Jazz At The Philharmonic In Europe", "An Electrifying Evening With The Dizzy Gillespie Quintet" and "Dizzy On The French Riviera", along with selected other 'live" performances. It includes performances with a number of noted jazz musicians, including Clark Terry, J.J. Johnson. Stan Getz, Benny Carter, Cannonball Adderley, Leo Wright, Chuck Lampkin, Bob Cunningham, Candido Camero, Charlie Ventura, Mel Lewis and others. It's a highly enlightening introduction to Schifrin's early years on the US jazz scene, working with one of the pioneers and architects of bebop, on a range of repertoire that includes his own compositions, bebop classics and vibrant Latin jazz.