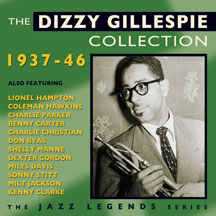 This is part of a mini-series on our competitively priced budget label Fabulous under the banner of Jazz Legends, presenting some of great and influential names of jazz, with recordings drawn from the classic era of the genre's development between 1920 and 1950. Dizzy Gillespie was one of the major figures in jazz, recognised as one of the great innovative trumpeters, and a pioneer of bebop. He was a highly versatile musician, equally at home on piano, as well as an arranger and composer, writing a number of modern jazz standards. His larger-then-life stage presence matched his startling playing, with his scat vocals, a humorous demeanour and trademark beret and puffed-out cheeks creating a unique personal. Originally a disciple of Roy Eldridge, he developed a more complex, ambitious and dramatic approach to the trumpet, and with contemporaries like Charlie Parker, Thelonious Monk and Kenny Clarke he experimented with harmonic structures and chord progressions, and a more challenging approach to improvisation, to develop what became bebop. This collection is a snapshot of the first decade of his recording career, starting in the swing era and cherry-picking recordings which trace his progress to the early years of bebop in the mid-40s. As well as making for very entertaining listening it gives an enlightening insight into his early years in the top flight of jazz.