Doc Severinsen - Tempestuous Trumpet / The Big Bands Back In Town 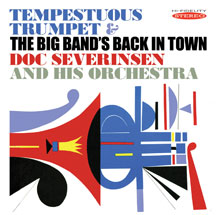 Two LPs of exciting big band music ('Tempestuous Trumpet' / 'The Big Band's Back in Town') performed by trumpet virtuoso Doc Severinsen and his orchestra. They are appearing here for the first time on CD and have been remastered in glorious stereo. Trumpet virtuoso Doc Severinsen was orchestra leader of the Johnny Carson hosted Tonight Show from 1967 to 1992 and also had a prolific recording career. Both of these albums from the early 1960s, released on the Command label and produced by Enoch Light, offer the listener thrilling big band music.