Twin brothers torn apart by violence. On a mission of revenge. Together they deliver... DOUBLE IMPACT! 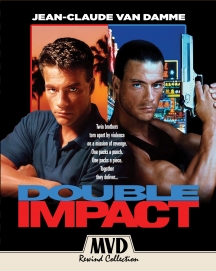 What could be better than Jean-Claude Van Damme (Lionheart) in an explosively entertaining action extravaganza? Two of him! There's twice the excitement, twice the mayhem and twice the fun in this turbo-charged adventure that pushes the thrills into overdrive.

Van Damme leaps into the dual roles of Chad and Alex Wagner, twin brothers who were separated after their parents' brutal murder. Years later, the two couldn't be more different: Chad is a slick Beverly Hills fitness instructor, while Alex is a rough and tumble smuggler on the gritty streets of Hong Kong. But when fate throws them together again, Chad and Alex discover that there's one thing they have in common: they're both fighting machines! Determined to enact revenge on their parents' killers, the martial-arts experts kick, chop and shoot all the way to an electrifying final showdown aboard a gargantuan freighter in Hong Kong harbor.

There's an undeniable popcorn munching, arguably brain dead, quality to Double Impact, and for those in the mood for such fare, this film provides pretty much everything you could want. MVD Rewind has done fans of this outing a major favor by providing a release with solid technical merits and some really appealing supplements. Recommended.

MVD have gone an extra mile to ensure that film looks (and sounds) better than any previous home video release of Double Impact we've seen in the past... A testament to this company's love for these unheralded films.

—Austin Trunick, Under the Radar

—Rich Cline, Shadows on the Wall

Four (out of five) Stars!

What makes Double Impact, for all its dull-witted theatrics, an energizing experience is the picture's astonishing level of ballistic mayhem... The sound effects alone have a thrilling savagery.

Van Damme was never great with drama, lousy with the English language, but put the man in tight pants and surround him with Asian stuntmen, and there's pure joy to be had.

A damn good action film with some of the best Van Damme fights ever filmed.